and SpaceX. As a strategic partner of the Axel Springer Awards 2020, Einhell CEO Andreas Kroiss is invited to discuss future topics, pioneering spirit and battery technology with space pioneer Musk, who is this year’s recipient of the award.

The Axel Springer Award is a prestigious award given to distinguished pioneers who are not only highly innovative and have had a major cultural impact on our world, previous recipients have included such major figures as Mark Zuckerberg, Sir Tim Berners-Lee and Jeff Bezos.

Inspired by Tesla’s Meteoric rise in the automotive industry through revolutionizing the battery technology, Einhell seeks to replicate Tesla’s success by setting new standards in the world of DIY Power tools through their Power-X-Change battery platform. Most recently, a battery in the Power-X-Change system also won “best-in-class” in comparison tests published by Stiftung Warentest, the EU funded German consumer testing organization.

Tenpower lies at the very heart of Einhell’s Power X-Change battery (PCX) platform. Since the platform’s inception in 2014, Tenpower has been Einhell’s exclusive supplier of lithium-ion battery cells, supplying Einhell with more than 100 million cells.

Tenpower is a leading cylindrical lithium-ion battery cell developer and manufacturer specialize in producing high rate lithium-ion battery cells. Tenpower has accumulated tremendous amounts of know-how through 14 years of persistent endeavor in basic material research and electrochemical technologies. Owing to prior experience in the power tool battery industry, Tenpower is a strong proponent of quality-first philosophy, investing heavily in state-of-the-art equipment and rigorous quality control processes to guarantee the consistency and safety of the battery cells. Today Tenpower has expanded to various industries including power tools, micro-mobility, smart appliances and critical applications, incorporated into the supply chain of many leading first-tier international companies, shipping more than 10 billion battery cells to hundreds of companies across more than 40 countries. Further information at www.tenpowercell.com.

Einhell Germany AG is a leading manufacturer of state-of-the-art tools and equipment for the house and garden. By continuously expanding our innovative rechargeable battery platform Power X-
Change, we are now already the market leader in the area of cordless tools and garden equipment. We set new standards in terms of the endurance, performance, and safety of our products, and we inspire our customers by offering excellent value for money, first-class customer service, and the freedom of cordless operation for all their DIY projects. Further information at
www.einhell.de. 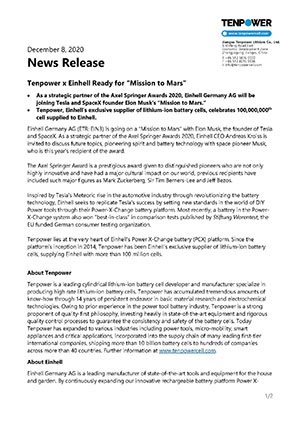